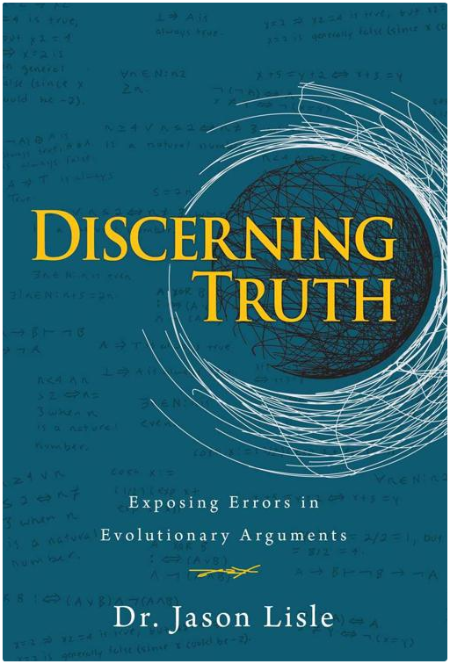 Description:
Every day Christians are faced with an increasing onslaught of criticism from evolutionists for their belief in God and His glorious creation. What do you say when your faith is challenged by those claiming to speak in the name of science or reason? Discerning Truth provides a practical and engaging resource on the use of logic in this critical debate. Filled with anecdotes from both creative examples and real-life illustrations that help clarify logical issues in apologetics. Become skilled at distinguishing sound arguments from emotionally-charged rhetoric. Helps any believer refute evolutionary perspectives. Lisle believes that creationists need to be able to recognize and refute evolutionist arguments, and to do so in a way that both honors God and lines up with the truth of His Word (Eph. 5:1). The role of logic, the study of correct reasoning, is becoming a vanishing skill in our society. Yet it is a vital tool in assisting Christians in assessing the weaknesses in evolutionary thought. Here is the clear and concise guide for every believer in defending your faith in the face of adversity.

About the Author
Dr. Jason Lisle is the Director of Research and a featured speaker and writer for the Institute for Creation Research. He previously served as the Planetarium Director for the Creation Museum in KY. Dr. Lisle has also authored a number of books which include: Taking Back Astronomy, The Ultimate Proof of Creation, Old-Earth Creationism on Trial, and The Stargazer’s Guide to the Night Sky.
Dr. Jason Lisle holds bachelor of science degrees in physics and astronomy from Ohio Wesleyan University, as well as a master’s and PhD in Astro-physics from the University of Colorado in Boulder. As a creation scientist Dr. Lisle effectively communicates a broad range of topics from in-depth presentations of distant starlight, Einstein’s relativity, and problems with the big bang to topics from astronomy and general science to apologetics and dinosaurs.