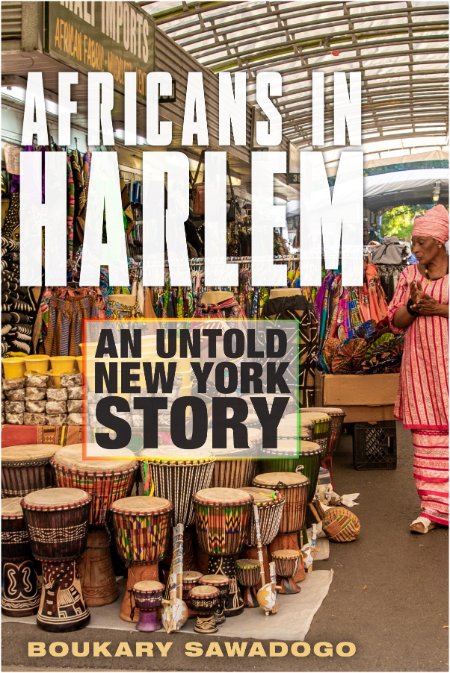 Description:
The untold story of African-born migrants and their vibrant African influence in Harlem.

From the 1920s to the early 1960s, Harlem was the intellectual and cultural center of the Black world. The Harlem Renaissance movement brought together Black writers, artists, and musicians from different backgrounds who helped rethink the place of Black people in American society at a time of segregation and lack of recognition of their civil rights. But where is the story of African immigrants in Harlem’s most recent renaissance? Africans in Harlem examines the intellectual, artistic, and creative exchanges between Africa and New York dating back to the 1910s, a story that has not been fully told until now.

From Little Senegal, along 116th Street between Lenox Avenue and Frederick Douglass Boulevard, to the African street vendors on 125th Street, to African stores, restaurants, and businesses throughout the neighborhood, the African presence in Harlem has never been more active and visible than it is today. In Africans in Harlem , author, scholar, writer, and filmmaker Boukary Sawadogo explores Harlem’s African presence and influence from his own perspective as an African-born immigrant. Sawadogo captures the experiences, challenges, and problems African émigrés have faced in Harlem since the 1980s, notably work, interaction, diversity, identity, religion, and education. With a keen focus on the history of Africans through the lens of media, theater, the arts, and politics, this historical overview features compelling character-driven narratives and interviews of longtime residents as well as community and religious leaders.

A blend of self-examination as an immigrant member in Harlem and research on diasporic community building in New York City, Africans in Harlem reveals how African immigrants have transformed Harlem economically and culturally as they too have been transformed. It is also a story about New York City and its self-renewal by the contributions of new human capital, creative energies, dreams nurtured and fulfilled, and good neighbors by drawing parallels between the history of the African presence in Harlem with those of other ethnic immigrants in the most storied neighborhood in America.