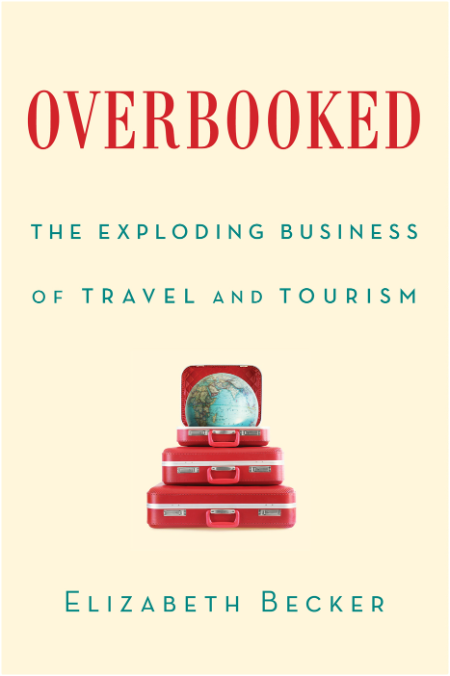 Description:
Tourism, fast becoming the largest global business, employs one out of twelve persons and produces $6.5 trillion of the world’s economy. In a groundbreaking book, Elizabeth Becker uncovers how what was once a hobby has become a colossal enterprise with profound impact on countries, the environment, and cultural heritage.
This invisible industry exploded at the end of the Cold War. In 2012 the number of tourists traveling the world reached one billion. Now everything can be packaged as a tour: with the high cost of medical care in the U.S., Americans are booking a vacation and an operation in countries like Turkey for a fraction of the cost at home.
Becker travels the world to take the measure of the business: France invented the travel business and is still its leader; Venice is expiring of over-tourism. In Cambodia, tourists crawl over the temples of Angkor, jeopardizing precious cultural sites. Costa Rica rejected raising cattle for American fast-food restaurants to protect their wilderness for the more lucrative field of eco-tourism.
Dubai has transformed a patch of desert in the Arabian Gulf into a mammoth shopping mall. Africa’s safaris are thriving, even as its wildlife is threatened by foreign poachers. Large cruise ships are spoiling the oceans and ruining city ports as their American-based companies reap handsome profits through tax loopholes. China, the giant, is at last inviting tourists and sending its own out in droves. The United States, which invented some of the best of tourism, has lost its edge due to political battles. Becker reveals travel as product. Seeing the tourism industry from the inside out, through her eyes and ears, we experience a dizzying range of travel options though very few quiet getaways. Her investigation is a first examination of one of the largest and potentially most destructive enterprises in the world.

Amazon.com Review
An Amazon Best Book of the Month, April 2013: Tourism is on track to become the world’s biggest business. In Overbooked, Elizabeth Becker, senior foreign editor at NPR and a former New York Times correspondent, uses tourism as a lens through which to explore the current geopolitical landscape. As much as Overbooked travels across countries, it also travels through time: Becker looks at tourism’s past (popularized by the French in the ’50s!), where it is today (the prevalence of resort and cultural travel), and its future (China’s rise as both a destination and a source of tourists). As much economic development as tourism brings, Becker consistently sees a dark side to the industry’s rapid growth. She writes, "Tourism is one of those double-edged swords that may look like an easy way to earn desperately needed money but can ravage wilderness areas and undermine native cultures to fit into package tours." –Kevin Nguyen

Review
“Elizabeth Becker has found a giant gap in journalistic coverage and stepped squarely into the middle of it. Even though it’s under our noses, beneath our feet, even in our happier dreams, rarely has the investigative story she recounts in her new book previously received the coverage it deserves: The rampant growth of travel and tourism.” (*National Geographic* )

“The definitive account of the rise of the modern tourism industry, from its beginnings as a small, fanciful pastime among elites, to its explosive growth after World War II, to its present as an economic engine valued at $7 trillion.” (*Bloomberg BusinessWeek* )

“Ms. Becker is a skilled, critical writer delivering illuminating information, telling engaging stories, and advancing her own personal observations. Overbooked appeals to a wide audience: those who make the billion trips annually; those who have a stake in the places impacted, sometimes for better, but all too often for worse, by those travelers’ visits; and all who have a stake in the global economy.” (*New York Journal of Books* )

“In the tourism industry, image is definitely everything, but Becker shows readers the flip side of all this luxury and play, exposing the seedy underbelly of a business gone haywire from Cambodia to the United States.” (*Kirkus Reviews, Starred Review* )

“Travel is a huge global industry, rivaling oil and finance in economic value. Now, a terrific reporter gives us a full picture of its dimensions and its future. Elizabeth Becker does so, not by loading us down with statistics but by taking us around the world to match up the daunting numbers with places, adventures, and even pitfalls that will keep you reading.” (Steven Brill, author of *Class Warfare* )

“A comprehensive, often alarming, and sometimes puzzling examination of an oft-invisible powerhouse. . . . Overbooked succeeds in demonstrating the growing heft of the travel industry and the numerous problems that are associated with it.” (*The Weekly Standard* )

“Journalist Becker travels widely, experiencing and analyzing ‘the stealth industry of the twenty-first century.’ . . . Impressively wide-ranging . . . intriguing and eye-opening, this book will leave few in doubt that tourism deserves more consideration than it has hitherto received in larger discussions of globalization and public policy.” (*Publishers Weekly* )

“Tourism is one of the world’s largest – and unexamined – industries. Elizabeth Becker takes us on a compelling journey across continents to show us just how essential tourism is to global prosperity. You will never book a room, ascend the Eiffel Tower, or see the sites in quite the same way again.” (Zachary Karabell, author of *Superfusion* )

“Follow Elizabeth Becker on this trip around the world and become a more mindful traveler. She is not only an intrepid globetrotter, but a terrific reporter who asks all the right questions!” (Sylvia Nasar, author of Grand Pursuit and* A Beautiful Mind* )