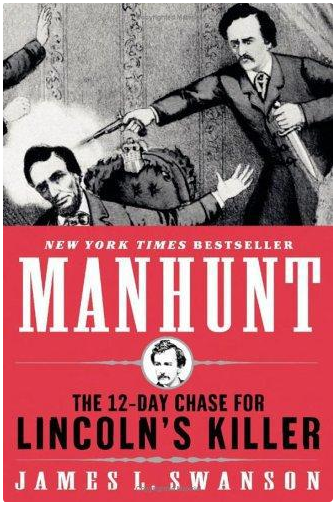 Description:
The murder of Abraham Lincoln set off the greatest manhunt in American history. From April 14 to April 26, 1865, the assassin, John Wilkes Booth, led Union cavalry and detectives on a wild twelve-day chase through the streets of Washington, D.C., across the swamps of Maryland, and into the forests of Virginia, while the nation, still reeling from the just-ended Civil War, watched in horror and sadness.
James L. Swanson’s Manhunt is a fascinating tale of murder, intrigue, and betrayal. A gripping hour-by-hour account told through the eyes of the hunted and the hunters, this is history as you’ve never read it before.

Amazon.com Review
The Greatest Manhunt in American History
For 12 days after his brazen assassination of Abraham Lincoln, John Wilkes Booth was at large, and in Manhunt, historian James L. Swanson tells the vivid, fully documented tale of his escape and the wild, massive pursuit. Get a taste of the daily drama from this timeline of the desperate search.
April 14, 1865Around noon, Booth learns that Lincoln is coming to Ford’s Theatre that night. He has eight hours to prepare his plan.
10:15 pm: Booth shoots the president, leaps to the stage, and escapes on a waiting horse.
Secretary of War Edwin Stanton orders the manhunt to begin.
April 15About 4:00 am: Booth seeks treatment for a broken leg at Dr. Samuel Mudd’s farm near Beantown, Maryland. Cavalry patrol heads south toward Mudd farm.
Confederate operative Thomas Jones hides Booth in a remote pine thicket for five days, frustrating the manhunters.
April 19Tens of thousands watch the procession to the U.S. Capitol, where President Lincoln lies in state. Wild rumors and stories of false sightings of Booth spread.
April 20Stanton offers a $100,000 reward for the assassins, and threatens death to any citizen who helps them.
After hiding Booth in Maryland, Jones puts him in a rowboat on the Potomac River, bound for Virginia. More than a thousand manhunters are still searching in Maryland. In the dark, Booth rows the wrong way and first ends up back in Maryland.
April 20-24Booth lands in the northern neck of Virginia, and Confederate agents and sympathizers guide him to Port Conway, Virginia.
April 24Booth befriends three Confederate soldiers who help him cross the Rappahannock River to Port Royal and then guide him further southwest to the Garrett farm.
Union troops in Washington receive a report of a Booth sighting. They board a U.S. Navy tug and steam south, right past Booth’s hideout at the Garrett farm.
April 25The 16th New York Calvary, realizing their error, turns around and surrounds the Garrett farm after midnight that night.
April 26When Booth refuses to surrender, troops set the barn on fire, and Boston Corbett shoots the assassin. Booth dies a few hours later, at sunrise.
April 26-27Booth’s body is brought back to Washington, where it is autopsied, photographed, and buried in a secret grave.

From Publishers Weekly
Starred Review. In the early days of April 1865, with the bloody war to preserve the union finished, Swanson tells us, Abraham Lincoln was "jubilant." Elsewhere in Washington, the other player in the coming drama of the president’s assassination was miserable. Hearing Lincoln’s April 10 victory speech, famed actor and Confederate die-hard John Wilkes Booth turned to a friend and remarked with seething hatred, "That means nigger citizenship. Now, by God, I’ll put him through." On April 14, Booth did just that. With great power, passion and at a thrilling, breakneck pace, Swanson (Lincoln’s Assassins: Their Trial and Execution) conjures up an exhausted yet jubilant nation ruptured by grief, stunned by tragedy and hell-bent on revenge. For 12 days, assisted by family and some women smitten by his legendary physical beauty, Booth relied on smarts, stealth and luck to elude the best detectives, military officers and local police the federal government could muster. Taking the reader into the action, the story is shot through with breathless, vivid, even gory detail. With a deft, probing style and no small amount of swagger, Swanson, a member of the Lincoln Bicentennial Commission, has crafted pure narrative pleasure, sure to satisfy the casual reader and Civil War aficionado alike. 11 b&w photos not seen by PW. (Feb. 7)
Copyright © Reed Business Information, a division of Reed Elsevier Inc. All rights reserved.